Is She Really That Far Ahead? Poll Has Lujan Grisham Leaving Dem Rivals In Dust, Plus: Mayor '18: The Latest On The TV Spending

Is she really ahead that much? That was the first reaction we heard to a poll that shows Rep. Michelle Lujan Grisham blowing away her three challengers for the 2018 Democratic gubernatorial nomination.

Former TV executive Jeff Apodaca placed second with 10 percent. State Senator Joe Cervantes barely registered with 3 percent. Alcohol prevention educator Peter DeBenedittis received 2 percent. Ten percent of likely voters were undecided. The poll's margin of error was put at 4.6 percent. Greenberg Quninlan Rosner has worked with Grisham, but the poll was not done for any candidate, but for the Institute.

Surely Grisham is far ahead, having the name ID of a congresswoman who has been busy campaigning for a year and raising substantial funds. But is the race closed out as some might infer from this survey?

No, the race is not closed out but it soon could be if one of her rivals does not do something radical to change the perception of the contest. Before we get to that, here's a skeptical view of the poll from a Dem consultant:

That poll should be taken with a big grain of salt. Hillary was up similarly on Bernie Sanders in the '16 NM primary and we saw how that turned out. (Clinton won by a narrow margin). People want a choice; they don't want an anointment. It's not an easy hill to climb but there's been no paid communications in the contest and no focus on that race yet.

The trouble is that Grisham's two main challengers--Apodaca and Cervantes--may be out of position. The only area where Grisham appears weak is with the left wing of her party where disgruntled but energized Bernie Sanders supporters and economic populists reside. Yet Cervantes, Apodaca and Grisham are pretty much ignoring them. DeBenedettis is running as a progressive and is not, but he's not raising the money he will meed to get that message out.

Cervantes and Apodaca have long been associated with the moderate wing of the party. Grisham has liberal positions on matters such as abortion but also has centrist instincts.

With no serious challenger to her left and with Dems hungry for a win, she is in good position with a large swath of the party. She can keep playing both liberal and centrist politics.

Cervantes and Apodaca are not going to get where they need by deriding Grisham as a professional politician. They are going to have to distinguish themselves in a much more meaningful way. That will mean taking big risks and entertaining the notion of veering left, even if it is against every instinct in their bones.

An enthusiastic, well-funded Hispanic economic populist with moderate views on social issues could give Grisham pause and have Dems voters taking a serious look. Right now there are no takers, leaving the nomination for Grisham to take. Stay tuned.

Whoever gets the Dem nomination next June will have a valuable prize indeed. A consensus has formed among the pundits that New Mexico is poised to turn the Fourth Floor into an ocean of blue after its long season of red. From the National Journal:

(New Mexico) will be Democrats’ top pickup opportunity. After eight years of Republican Martinez and in a state that Democrats have dominated in federal races for the past decade, the winner of the contested Democratic primary will be favored over likely GOP nominee Steve Pearce. The general election would feature two House members if Michelle Lujan Grisham, who leads the field in fundraising and recently hired a campaign manager, emerges with the nomination. 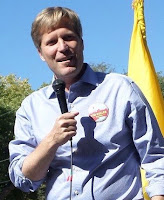 Tim Keller's aggressive record as state auditor has impressed some voters but not all. Here's reader Levi Fetta pushing back against the praise Keller has received and which was noted on last Thursday's blog.

Another fluff piece on Keller. . . Keller has accused a lot of people of misuse of public funds, but how many of these cases have resulted in restitution, criminal charges/arrest/convictions, civil lawsuits? I know the State Auditor is not responsible for the this part of it, but it is one thing to claim something and another to actually see something done.

Furthermore, Keller stated insurance companies possibly owed over $190 million in unpaid taxes. He was way off. A big number for headlines? Who knows? An outside auditor from Georgia narrowed the total to $65 million. By the way, the Office of Superintendent of Insurance has been asleep at the wheel for decades to allow this to happen.

Voters can question Keller's record as Auditor but Lewis faces a bigger challenge with his record as a longtime councilor. Reader Kelley DuPont writes:

Joe, For me, I can’t separate Lewis from Mayor Berry and the do-nothing city councilors. I can see they all have failed the city. Lewis and his fellow councilors have sat helplessly on their hands just like Berry and watched Albuquerque burn, figuratively of course. As far as I’m concerned Dan Lewis had his chance to improve/rescue the city. There is no evidence that he would do anything different than he’s done.

If Keller does get elected it won't be all hugs and kisses with the Democratic-controlled City Council. Klarissa Pena, who represents a Valley district heavy in Hispanic voters, appears to be a holdout when it comes to Keller. A fund-raiser for the PAC that is supporting Keller drew all the Democratic city councilors as co-hosts, except one--Councilor Pena. The co-hosts included:

Pena's district only went narrowly for Keller who narrowly beat out Brian Colón there.

One point of contention between Pena and Keller could be over the controversial west side planned community of Santolina. She's been supportive while Keller has not. In response Santolina has financed media attacks against him.

UPDATE: The Keller camp says Pena is "all in" for Keller and will endorse him later this week.

Lewis is ramping up his TV schedule as early voting escalates and the Nov. 14 Election Day nears. Media veteran Chris Brown reports Lewis late last week added almost $62,000 in TV buys for the four network affiliates through Friday, November 10. This brings his total TV budget on the network affiliates for the run-off to $123,000 and 484 spots. Also, he spent $9,000 on Comcast.

Lewis is privately financing and has reported raising over $200,000 for the run-off. Keller does have a PAC independent of his campaign helping him and that recently reported having over $90,000 in cash.

We received late word Monday that the PAC supporting Keller--ABQ Forward Together--has made a TV buy for about $90,000, matching what they recently reported having in cash. The PAC continues to have fund-raisers.

As for the PAC getting backing from land developer Santolina and that has financed TV ads against, Keller. It has gone dark. No new media buys.

Rick Abraham of Data Flux is back with us to run the numbers for the run-off. He reports as of the end of Friday nearly 14,000 voters had cast ballots via absentee or early voting. He thinks we are on track for a turnout of about 70,000 or more, down from the 100,000 who voted in the Oct. 3 election. After the record smashing turnout then, we'll give him some leeway on that prediction.

This is the home of New Mexico politics.


E-mail your news and comments. (jmonahan@ix.netcom.com)