TV Weatherman Ronchetti; Go For A Rerun? After A Losing Senate Bid Sources Say He Weighs Guv's Race; Would Be Joining Crowded GOP Field For Right To Take On MLG 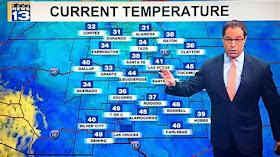 Mark Ronchetti for Governor? Yes, according to senior sources.
They inform that the TV weatherman, who ran unsuccessfully for a US Senate seat in 2020, is thinking about seeking the 2022 GOP gubernatorial nomination and if he is a go could announce "in several weeks."
A Ronchetti entry would grow the Republican field to eight contenders and would come as Dem Guv Michelle Lujan Grisham's approval rating slips below the key 50 percent mark--at 46 percent in the most recent PPP poll--a Dem oriented firm.
ABQ crime, the economic shutdown and the ongoing Covid crisis are among the causes of the Guv's mixed polling.
Ronchetti was defeated by Ben Ray Lujan for the Senate by a margin of 6.1 points in a three way race. Lujan--51.7; Ronchetti--45.6; Libertarian Walsh--2.6 percent.
His supporters will spin that he came close and that in an off year election with lower turnout, he would have a better shot at victory even though no New Mexico governor has lost re-election since 1994. They think an off year election where the party in power--the Dems--will be weak--but then every governor election is held in an off-year.
Detractors will argue that he had his chance and that the election would simply be a rerun of his loss to Lujan. That senate loss, they say, took some luster off of the veteran forecaster and he has lost the advantage of positioning himself as a new outsider representing a breath of fresh air, instead of a run of the mill Republican in a party that is highly unpopular in blue New Mexico.
Still, Ronchetti beat expectations when it came to raising money for that senate campaign and proved to be an able debater and that has to worry his competitors.
If Ronchetti, 47, gets in it's a sure bet that Jay McCleskey, the controversial GOP political and media consultant who handled Susan Martinez's Guv campaigns including her 2010 win, will be front and center as he was in Ronchetti's senate run. The consultant stands to rake in a financial windfall--win or lose. Already Dems are saying Ronchetti is woefully unqualified and is being "seduced" by McCleskey to get in the race.
EYEING RONCHETTI
Ronchetti's tenure as the chief meteorologist for KRQE-TV, the ABQ CBS affiliate where he has been since 2006, will be eyed.
The station hired Ronchetti back after his failed senate run which brought this criticism from a journalism group:
The rehiring, the SPJ said, “should raise red flags for anyone worried about political influence in newsrooms.” It further noted that “throughout his campaign, Ronchetti proudly stated, ‘I stand with President (Donald) Trump.’ ” Ronchetti responded: “Have we gotten to a point in this country where you can’t step aside and say, ” ‘Hey, I want to try and help in the world of politics,’ and if it doesn’t work out then you’re done, and you don’t have a right to come back and earn a living?"
The question now for KRQE manager Bill Anderson is whether he has cut another deal with Ronchetti that would allow him to make a risk free run and return to his day job if he loses again. It's an ethical question for him and Nexstar, the media giant that owns KRQE. Critics argue the station is licensed by the FCC to serve the public interest, not as a Republican bullpen for potential GOP candidates and will want Anderson and Nextstar to disclose their intentions.
While that insider issue plays out, Ronchetti's name ID remains a big boost for the June primary and would put him in a good starting position.
T or C State Rep. Rebecca Dow, financial consultant Greg Zanetti and Sandoval County Commissioner Jay Block are the other top tier names for the GOP nomination.
Dow has seasoned Sen. Ted Cruz consultants on her team so she will fight hard. Zanetti has experience and Block is a solid Trumper while Ronchetti is not. (The other GOP candidates are Louie Sanchez, Tim Walsh, Karen Bedonie and Ethel Maharg.)
"With a Ronchetti entry, it looks like a free for all," opined a Senior GOP Alligator.
While the R's get ready to sort themselves out, MLG will work to steady her ship. She's already running pro-choice Facebook ads to keep her base intact. And she has an oil and gas boom that will help her with the economy. But these are unsteady times and no free rides come with that.
This is the home of New Mexico politics.
E-mail your news and comments. (newsguy@yahoo.com)
Interested in reaching New Mexico's most informed audience? Advertise here.